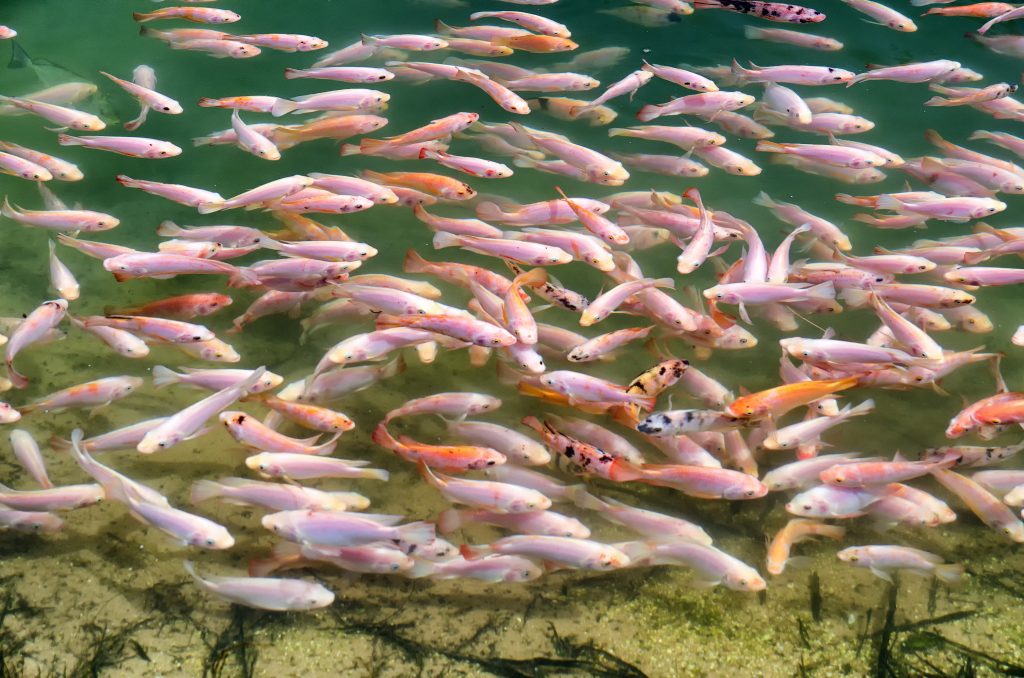 The first to experiment with saltwater tilapia aquaculture, were a group of researchers on the island of Hawaii in the 1960s, when looking for alternatives to replace the live bait in the skipjack tuna fisheries (K. pelamis), they discovered that monzambic tilapia (O. mossambicus) adapted very well to brackish water culture conditions. Almost in parallel in Israel, the studies continued, and it was confirmed that both the blue tilapia (O. aureus) and also its hybrids, had an extraordinary ability to adapt to different salinities. Already at the end of the 80s it was discovered that the red tilapia (hybrid of O. aureus and O. nioloticus) had a great performance in sea water culture, much better compared to the other tilapia species. This is mainly due to the fact that it can be transferred to the sea in early stages of development (fry from 5 grams & on). Since then, red tilapia has taken great importance as a highly profitable production alternative in coastal countries that have large exploitable areas for aquaculture. A few weeks ago we became acquainted with great enthusiasm, that Singapore has almost achieve, after years of work, to breed a 100% local strain of tilapia that can be grown in saltwater without problems. Although there are several suppliers of these red tilapia strains resilient to saline environments in the world (Israel, the United States, Taiwan are some of the supplier countries), the seeds have a high cost and their transport to distant places is always a great risk. The price of each unit of seed can be around 0.99 and 1.5 American dollars in the international market (Alibaba, 2019), to this must be added the cost of transportation. This is why, it is so important for the countries that are interested in the production of saltwater tilapia to, have a local production of fingerlings.

Indonesia is the world’s largest producer of sea cultured tilapia, with more than 136,000 tons per year (FAO 2019), and has a wide range of its own strains, including two varieties for production in salt water, the Srikandi for brackish environments, and Salina for marine environments. Among the factors that greatly favor the activity we must highlight its geography, full of channels and archipelagos that gives them a huge number of environments and thousands of square kilometers of coast, protected from the inclemency of the open sea. According to what they affirm, their success is based on four fundamental pillars, which are the cultivation method, the high quality raw materials of their feed, the exhaustive control and constant monitoring of the water conditions in the farms, and the fact that they have most of the demanding international certifications that open the doors of almost any market worldwide. In contrast, we have countries such as the aforementioned Singapore; India, that analyzes starting the red tilapia aquaculture in the coastal area of ​​the Gujarat region; or the Philippines, which despite being far from the successful numbers of its oceanic neighbor, has a large growth potential and similar geographical characteristics. In fact, the Philippines is very well advanced and is, perhaps, one of the countries with the greatest interest in the development of alternatives for tilapia aquaculture in salty waters, since it has had its own GIFT genetic improvement project since 1988. This genetic program helped to create the PF strain, which has the best performance of all Asian varieties of fingerlings for sea farming and is one of the most recognized worldwide. In South America, there is also a growing interest in starting exploitations of the red tilapia hybrid in coastal areas. Mexico, for example, has been developing culture tests in closed systems since 2011 in Baja California, Cuba has already made some successful pilots in different regions of the country and Panama and Honduras have also started their own pilots.

Just as Singapore undertook the long journey of owning a special fingerling that suits its needs for their different farming environments, it is very important that those countries that venture into the farming of tilapia at sea, develop their own strains and genetic lines. It is not viable either economically, sanitary and nor logistically to base the aquaculture industry of a country, on foreign suppliers, mainly due to the fragility of the model. From the economic point of view, it will always be more expensive to acquire foreign seed, and produce it locally could cost half the price (US$ 0.5), from the sanitary perspective, is a great and always latent risk to enter diseases that may affect the industry (as a recent example we have the one of the TiLV virus worldwide spread), and logistically talking, it is very difficult to coordinate transports when the suppliers could be on the other side of the world with different weather conditions and different time zones. For these reasons, and some more, making genetic technology available for the tilapia aquaculture industry and having all the existing experience at the disposal of the researchers, will always be the most important step to achieve a solid and lasting production.